Amid the protests, I have found myself as an African American woman and spouse to a law enforcement officer in an extremely complicated position. I know the pain and historical trauma my black and brown brothers and sisters face, but I also feel the pain my husband brings home every day as an officer. Over the past week, I have prayed over him as he walks out the door. I have watched our daughters sob and lie awake until he is home from his shift at local protests. It has been unsettling, and at moments, I have felt my faith shaken and rocked to my core. 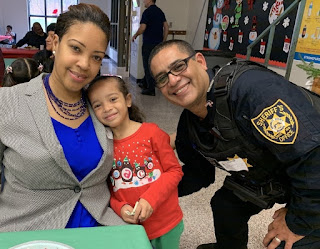 In the earlier parts of last week, I consistently watched the news and viewed my social media feeds more often than I would like to admit. I intentionally shared little for my own well-being. However, before I knew it, I was silently heading on a downward spiral. At times I found myself having a polarized view either for or against the police. I also had moments of feeling so alone with very few people to turn to- to periods where I wanted to go out and protest too! America’s historical roots are grounded in institutional racism, injustice, inequalities, discrimination, intolerance, and hatred (need I say more), which has led to the REVOLUTION. The tensions between police and the community are nothing new. Racial disparities in police interactions have been long-standing. According to the Washington Post’s database tracking police shootings, as of January 1, 2015, police officers killed 1,276 black people. The statistics are heartbreaking and cause for alarm. We are angered, sad, frustrated, fatigued, and ready to seek transformative social change.

Today, with eyes wide open and a grounded spirit, I find myself in a unique position. As an officer's spouse, I have been directly impacted by the fear, mistrust, and anger against the police. Additionally, for more than 10 years, I have had a working relationship with the criminal justice system to include law enforcement personnel and have trained many in trauma and de-escalation. I am also this chic from Queens, New York, whose best friend in 2001 lost her brother at the police's hands. The culmination of these experiences and others not mentioned has inspired me to develop a series of constructive dialogue in my community and surrounding communities on police and community relations. 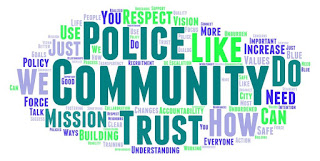 I am being called to use my strategic planning facilitator skills in this work. For a living, I facilitate bringing together diverse community, state, and federal stakeholders together to create, implement, and sustain change in policies and practices. I also am currently a doctoral candidate pursuing a Ph.D. in Industrial and Organizational Psychology with specific research interests in Police Psychology. In these contentious times, I am choosing to have the courage to advocate for collaboration and the possibility to reimagine relationships between police and the communities in which they serve. Dialogues built on empathy, trust, understanding, and shared action for healing and reconciliation. As I begin to see peaceful protests throughout the country and see humankind start to stand in solidarity with my black and brown sisters and brothers, I think the time is right for transformative social change to begin TOGETHER!

This work is spirit work and a chance to shift the paradigm. I am lucky to have my friend/mentor/sister, Dr. Virginia Dick of NextStep Evaluation, to accompany me on this mission. In the beginning, as my friend, Virginia, would call in on my family periodically throughout the day. Often, she simply was there to hold space, but recently she has been fired up to join forces on this effort! Together we are collaborating to take on pro-social activities to bridge the gap between police officers and the communities in which they serve. In addition, we are working on collaborating with local police departments and aide them in evaluating their community policing initiatives pro-bono. This is just the beginning, and we know this road is not going to be easy. Nonetheless, the revolution has started, and we choose to be a part of the change.

Virginia
I am silly, messy, emotional - a Cancer sign through and through - I'm also passionate, loyal, loving caretaker. I'm a momma wolf - to my kids, my rescue pups, and my friends. I'm wild and raw. I believe in LOVE and in making sure that those you love are free and supported to reach for the best version of themselves and that I should seek similar for myself. EVERYONE deserves love and support - regardless of gender identity, sexual preferences, race, or any other factors. Freedom and connection both coexist and thrive with each other.